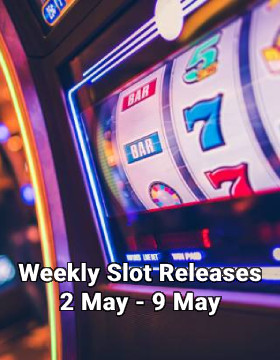 Weekly slot games releases 2 May - 9 May

Nolimit has once again captured the Wild West with their new game El Paso Gunfight xNudge®.

Nolimit is a game software provider based in Malta and released a remarkable Wild West style game on May 4, 2021. El Paso Gunfight xNudge®, unparalleled, is the most iconic game with a Western theme. It features a bet increase of up to x44,440, as well as 5 different bonus options. The game turns various combinations of scatters symbols into jumping wilds, and there are 2 different signs that offer options to enhance the game.

El Paso Gunfight xNudge® is the best of the 3 shooter slots that have been released by Nolimit Studios. The game runs on xNudge® mechanics.

It's not just another Wild West style game from the studio that created a couple of the most iconic western-themed games in casino libraries. El Paso Gunfight xNudge® is by far the boldest game of the trio of shooter slots the studio has created. After the huge success of Deadwood xNudge® and the original iconic Tombstone, their latest release redefines what their xNudge® mechanics can deliver, as well as the addition of Gunslinger's toughest hero, Dallas Stoudenmire.

The player gets to choose between 23334 and 43332, which will increase the appetite for volatility for anyone. The game features a shootout in the city of El Paso, which is located in Texas. The xNudge mechanic is the link in the Ol' Wild West trio and has a lot going for it.

That said, Nolimit City, is a developer of online casino platforms and games. Based in 3 locations: Malta, Stockholm and India. It offers high quality gaming content and provides operator services in every country in the world. The platform was designed and developed from the ground up, with a powerful engine that can handle huge volumes of games.

Relax Gaming, as an aggregator and provider of unique content for the igaming sphere, released a unique slot called Book of 99 on May 4, 2021.

The theme of the game is Greek mythology, and it is an extension of a whole line of content from Relax. That said, the RTP is 99%, making it the only slot that gives such a chic payoff to players.

During the game you should collect 99 books, which give you the opportunity to run 10 free spins. Of course the regular trigger, collection of 3 scatter symbols, is also here. After randomly selecting 1 of the 4 characters, there is an expanding ability in the Free Spins round, which provides an increase in winnings up to x5000 of the original bet.

The gameplay is complemented by luxurious animation combined with an exotic soundtrack. All this contributes to making Book of 99 a sought-after game.

This game is the latest game from Relax. Book of 99 stands out from the rest of its competitors because it is a great slot with many features aimed at attracting the maximum number of players.

Relax Gaming is a leading B2B provider in the field and provides players with a portfolio of over 2,000 casino games online.

May 4, 2021 the release of the legendary game Joker Times!

Every player loves quality joker games, which is why they should love the new slot called Kalamba Joker. The game takes place in a picture of medieval times, which gives everyone the opportunity to take a walk through history, enjoying the extreme volatility and what has become a classic: Vegas style, because it is so beloved among players.

Joker Times with its features:

Cashpots provides for 5 levels. To activate them, you need to fall 5 or more bonus symbols on 1 spin. This provides the opportunity to take the top level.

K-BOOST gives you the opportunity to get additional free spins when the counters are filled.

HYPERBONUS is a short jump to free spins game.

EXTRA FREE SPINS allows you to get 2 free spins, for this you must collect 3 Bonus symbols.

Every player should make sure they have the opportunity to escape to a fairy tale castle and have real fun on a trip through history with Joker Times!

INSPIRED is launching Scarab Gold, in its new mobile slot that has an ancient Egyptian theme.

On 04.05.2021, a great game called Scarab Gold™ was released by INSPIRED, it is made in an ancient Egyptian style and has 6 reels and 5 rows. It is a Ways slot game that is available on mobile devices online.

The game has bright graphics and exotic Egyptian soundtrack, while the design is high-tech. Scarab Gold runs on Mystery Boost™ game mechanics. All of this creates great entertainment for all slot lovers.

There is also an improved portrait version, which makes game more comfortable to play on smarphone.

Mystery Boost has empty symbols, they, combined with the scarab symbol, carry out the transformation into a reel symbol.

On a roll of 3 or more scatters, triggers the free spins bonus, it gives each player extra features. This includes an increasing unlimited multiplier located on any cascade, as well as mystery symbols that reveal reel symbols, extra coins or retriggers.

Scarab Gold, takes each player to a mysterious era of ancient Egypt and provides the opportunity to win from 15625 ways. The scarab is considered to be a very popular amulet in Ancient Egypt, it is a symbol of luck and good fortune. Scarab Gold has medium volatility and RTP - 95%, the game is aimed at casual online casino players.

On 5.05.2021, iSoftBet, which is a leading slots provider and platform aggregator, launched a hit called Hold & Win - Pearl Legend adventure.

The game is 3×5 and is set in a beautiful eastern temple. The temple is guarded by a dragon and there it is also filled with: phoenixes, golden frogs, and majestic dragons. Any spin can be complemented by the fire-breathing dragon's breath, which will lead to the addition of wilds symbols or additional pearls, as well as the possibility of changing all the royal symbols for high-paying winnings.

The Respins mode is triggered when 5 or more flickering pearls are rolled on a single spin. This mode transfers players to a 5x5 grid, which gives 3 re-spins, this provides the opportunity to collect more pearls, which have their own value. Each successful spin leads to the resetting of the counter.

In addition to the monetary values that are available on the reels, other pearls contain multipliers. The symbols of the pearls gives the opportunity to call 1 of the 4 reel boosters, they represent:

Pearl Legend: Hold & Win is the latest addition to iSoftBet's Hold & Win offering. iSoftBet operates in 19 markets from around the world, while providing the most worthwhile casino games. The way to market is through the GAP platform. This game is packed with many features and has a wide range of re-spin modifiers.

Players have the opportunity to enter the ancient Colosseum and fight for Greek glory, all in a new game released on May 6, 2021 called "The Legend of Athena"! The game is filled with gladiator helmets, amphorae, harps and horns, along with all that, the beautiful goddess of wisdom and war is present. She is armed with armor from Athens and is always ready to thrust her spear into the wealth of Attica. All paying symbols are substituted when the 3x win multiplier appears. Are you ready for an exciting battle in the Legend of Athena game?

The theme of the game is Ancient Greece and it has a maximum win of x5000 and even more! The game is 5x3 and has 10 paylines. Works on platforms: PC, tablets, smartphones, TV, for iOS/Android. Provider of the game is Red Tiger. Legend of Athena features one of the best game engines on the market. It uses powerful software as well as many state-of-the-art technologies, all in order for players to get the most out of the game and have a positive gaming experience.

Play'n GO decided to team up with a widely known rock band in the expanses of Sweden for a release called HammerFall, out May 6, 2021. HammerFall was based on the band of the same name, which was a very successful European power metal band. Thanks to it the sound of this genre of music was popularized and defined.

Given the fact that this is a musical slot, it combines elements of fantasy themes, which leads to an increase in its attractiveness. The plot is based on the mascot HammerFall - paladin Hector, he helps players to the most famous musical hits.

HammerFall has a lot of different fascinating moments, such as song features. They are activated when the charge meter is full, and each is capable of transporting the player to another world. Each feature is based on the HammerFall track, and the player gets to activate the Hammer High Overcharge feature, which provides an experience of 3 song features in turn.

In 2018 there was the launch of Play'n GO music slots, it was from that time that the company has been collaborating with rock bands such as: Saxon, Twisted Sister and Testament, which are widely known in their circles. The games convey the tone and mood of each of the bands, this is evident in the design as well as in the gameplay and features related to bonuses.

These music slots work with different bands to convey their personality. And the company itself takes great care to ensure that the gameplay matches the music.

Crypt of the Dead

Blueprint Gaming being the leading slot developer, on May 6, 2021, made the launch of their own new themed slot called Crypt of the Dead. There is no doubt that it will appeal to many players in the market.

The slot is 6 x 3 and has 4,096 different ways to win. The game takes place against the backdrop of the mysterious catacombs of an ancient pharaoh. The game maintains an adventurous setting and has a number of proven features.

Special expanding symbols have the ability to return, while becoming a major element of Blueprint. Crypt of the Dead gives each player up to 50 free spins, with the option to re-launch them while using this feature.

Crypt of the Dead shows Blueprint's commitment to variety in its content. The company recently released Fishin' Frenzy Prize Lines™ and Deal or No Deal™: Golden Game.

Even with the innovative pushing of design boundaries going on, this traditional genre and style can still exist and compete with the rest, so operators can still profit from it. Crypt of the Dead is a great game for this segment, as it provides many proven features that have been designed to appeal to players.

The video slot is 3x5 in size and represents the created wealth in the reels. The jackpots of the game are very large, along with the rest of the winnings.

The game provides 2 bonus rounds, with Respin and Jackpot, there are also expanding reels, they help trigger bonus modes. There is also a Respin Wild feature, it provides the addition of random wilds for the 1st respin.

"Respins" are triggered when 5 or more Money symbols fall on the reels on 1 spin, with players getting a 5×5 grid if the reels expand. This creates up to 60 paylines. Each successful spin gives a guarantee of getting one more spin additionally. Each symbol carries a price, which is what provides players with the ability to accumulate huge amounts of money.

On 06.05.2020, Yggdrasil, the world's leading publisher of gaming content, partnered with ReelPlay to create a joint project called Odin Infinity Reels™ with Megaways.

This game is the first to combine the popular mechanics of Odin Infinity Reels™ with Megaways. Players are presented with the mountainous world of Asgard, which has its own rainbow bridge, Bifrost, that looms somewhere in the distance.

The game starts with 3 reels and the number of symbols is very varied. Infinity Reels™ mechanics ensure that the reels increase with any winning combination, plus there is an increase in the winnings multiplier. It is possible to reach reel 15 and higher. It is possible to win a jackpot of up to x888.