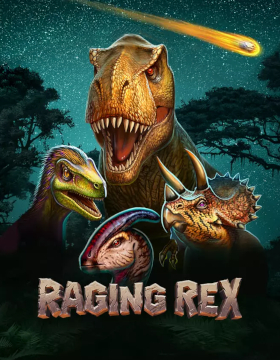 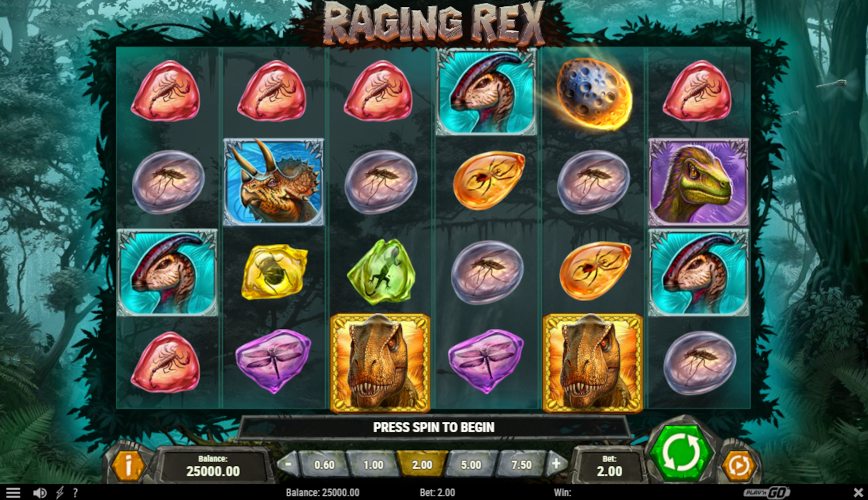 Raging Rex is a video slot from Play ‘n Go that was released on January 10, 2019. The Tyrannosaurus Rex serves as the story's protagonist, although there are also four other dinosaur creatures to encounter. One of these is the triceratops, which can be identified by the three horns on its head, making it easy to see. The animated film "The Land Before Time," which was released in the late 1980s, tells the story of four baby dinosaurs who go on a journey was probably where the designers drew their inspiration. One of them is the triceratops named Cera, who rose to fame very rapidly and won the hearts of both kids and adult people.You should read our review before deciding whether or not it is a game that is worth your time and money to play.

Rampage Feature. During the main game only, Free re-spins are triggered In the event when Raging Rex is completely stacked and can be seen. Each time the reels are re-spun, Raging Rex will advance one position to the left, until he reaches the first reel. When reel 1 is reached, the rampage re-spins come to an end.

Free Spins. To activate this additional feature, you must first collect 3, 4, 5, or 6 scatters, which will then offer 8, 15, 20, or 30 free spins, respectively, depending on how many scatters you collected. During this bonus feature, getting 2, 3, 4, or 5+ scatters awards an additional 5, 8, 15, or 20 spins.The amount of additional Free spins is theoretically infinite. Activating this feature Instantly awards a 5x bet win guarantee. Before starting this bonus feature, you have an option of choosing between two distinct extra feature which are:

- Wild Hunt. This feature provides you with chances of wild symbols with multipliers to land on the reels. The multipliers can combine up to x243.

- Primal Rage. This feature provides you with a stacked Raging Rex on each spin.

When we started playing the game, we were greeted with a beautifully drawn reelset with symbols that included different dinosaurs among them. The music that was playing in the background did not sound very frightening, and had a tone of adventure to it. We were aware that the fundamental aspect that encourages the overwhelming majority of individuals to play slot machines is the fashion in which the machines operate in terms of the rewards it provides. As a result, in order to put it through its paces, we made a deposit that was our regular amount, which is 200 Euros, and we set the stake to 1 Euro. Following that, we put this game through its paces by playing it for perhaps in the neighborhood of 300 rounds in order to fully test its capabilities. During the first one hundred spins nothing too exciting happened in terms of payouts, with the biggest payouts ranging from 10 to 15 times our bet thanks to the Rampage Feature. As a result of our first attempt, we ended up winning around 10 Euros. This was an okay beginning for a slot with such a level of volatility. We hoped for a better result during our next 100 spins and immediately started them. During them, we triggered the Free Spins bonus round, chose the Wild Hunt option, and it paid us a decent amount of around 60 times our bet. Thanks to that bonus round, and a few decent payouts during the main game here and there we almost broke even. During the final 100 spins the situation in terms of payouts was similar to our first attempt, and as a result we ended up with a deficit of 20 Euros in our bankroll after 300 spins. This was an acceptable result, since we had quite some fun during our playthrough.

This is a pretty straightforward slot with great animation, but with not a lot going in terms of bonus features it provides. The payouts during the main game are steady, but not too large. There is a potential for decent winning during the Free Spins, but unfortunately they do not come that often. High volatility of this slot makes it a good choice for people who like to risk big in a pursuit of great wins, but you have to be careful when playing it and know when to stop. Overall, this is a decent slot that is worth trying at least once. Good luck and have fun!