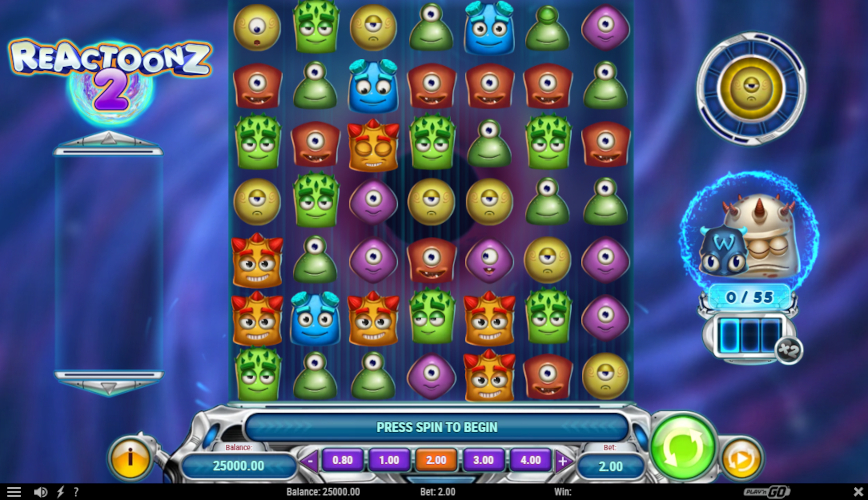 Reactoonz 2 is a sequel to the original Reactoonz that was well received fairly well by gamblers all over the world. This slot was released on October 1, 2020. The game has a space theme, but in no way, shape, or form is it anything like you would expect it to be in any capacity whatsoever. The content provider took the choice to give everything a cartoonish appearance, which resulted in the aliens looking like cute tiny animals instead of what you would expect them to be. They also included some fairly excellent music in the game, which they made to go in very well with the general atmosphere of the game. It includes music that is rousing and has an air of magic about it, and when winning combinations occur, you can also hear sounds produced by the aliens that are very small. The music is heroic, and it has an air of enchantment about it. The background depicts nothing really interesting, it is just a vast amount of pitch-black space with a few stars dotting it here and there. The game makes use of symbols that are not too complicated and are presented in a reasonably clear manner. They are made up of a number of different aliens that range in size and hue. By reading our evaluation, you will be able to decide for yourself whether or not it is beneficial to spend your time and money playing this slot machine.

After all of the winning clusters have been tallied and the cascades have been completed, the order of features is as follows:

Fluctometer. Every time through the rounds, a random selection determines which one-eyed symbol will be used. In the event that fluctuating symbols are part of a winning combination, an Electric WIld will emerge in any position where a symbol has previously been eliminated. The Fluctometer can store a maximum of 11 charges. When it is completely full, the Fluctometer will produce 1, 2, or 3 Electric Wilds at random.  Fluctometer is always active and may be recharged inside a single game round, however it will become inactive as soon as Gargantoon is released.

Quantumeter. Charge is added to the Quantumeter whenever non-Wild symbols are taken off the board by an Electric Wild. After releasing an Energoon, the Quantumeter will continue to charge, but after releasing a Gargantoon, it will stop charging. Each time a new round begins, Quantumeter will be reset. The Quantometer can store up to 135 charges across its four different charge levels. Gather 55 charges to advance to level 1, 85 charges to advance to level 2, and 110 charges to get to level 3, the completely charged condition. Gather a total of 135 charges in order to achieve level 4, the condition of being overcharged.

Uncharged Wilds. It is possible for Uncharged Wilds to show up on the grid during any cascade. Uncharged Wilds do not contribute to winning combinations, but they have the potential to turn into Electric Wilds if they appear horizontally or vertically near to winning symbols or if the Wild Pair Explosion feature is activated.

As soon as we fired up the game, we were greeted with music that was in no way eerie, as well as a reel set that was endearing to look at and included a wide range of extraterrestrial beings. We imagined that there would be a more gloomy vibe in the air due to the fact that we were interacting with extraterrestrials. We had experience playing slots that are quite similar to this one, so we were interested to see how it differed from the others. Because the majority of us gamblers play these kinds of slot machines in the hopes of winning a significant amount of money, we came to the conclusion that it was quite important to evaluate how effectively the machine functioned in terms of the rewards it delivered. In order for us to achieve this objective, we reverted to our standard approach, which consisted of making a deposit of 200 Euros, cutting the stake down to one euro, and continuing to play the game for somewhere in the neighborhood of 300 hundred rounds. The first one hundred spins were filled with a number of decent wins around 10 times our bet thanks to the abundance of bonuses feature that this slot has to offer, and thanks to that fact we did not lose that much, only around 10 Euros. The second one hundred spins were pretty similar to the first one hundred spins, with the main difference being that the largest payouts that we came across were about 20-25 times the amount that we had originally placed on the game. Once again, this happened as a direct consequence of the bonus features that were included into the game. We were still in the red by the sum of 25 Euros due to the fact that that specific attempt did not prove to be very successful. During our final one hundred spins, the aliens became more appealing to us, and because of those extra features once again, they provided us with a big win of 48 times our bet. Additionally, with the assistance of smaller payouts here and there, we were able to bring our bankroll back to its initial size. Although we did not end up with any winnings after a total of 300 spins on the slot machine, we were still fairly pleased with the way that our testing experience went because of the entertainment value that this slot provided to us.

Overall, if we had to pick between the original slot machine and this one, we would go with the original slot machine. Perhaps this is due to the fact that it was our first love and was very kind to us, and it does not provide a lower level of entertainment value than this slot machine. Bonus features in this slot are still amazing as in the original, but in our experience they paid a little bit less. Maybe that is because of the slot’s degree of volatility and this time it was not on our side. When everything is said and done, if you like the original Reactoonz or look for something new to play, give this slot a shot. Good luck and have fun!