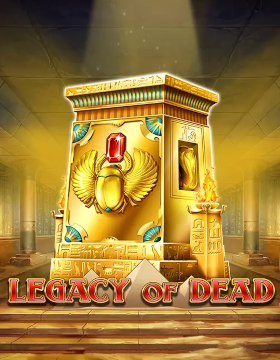 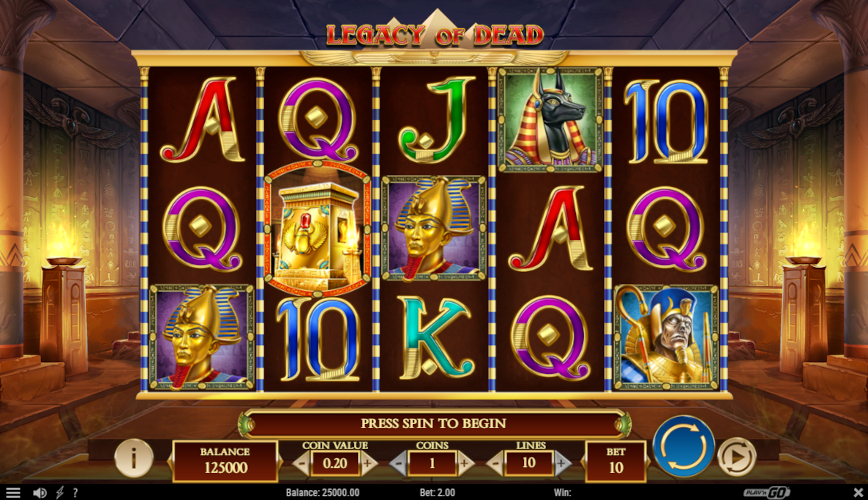 Legacy of Dead is a video slot from Play’n Go that was released on January 2, 2020. Legacy of Dead is a classic slot machine that is based on the ever-popular Ancient Egyptian theme. The Ancient Egyptian-themed game shines with grandeur because of its luxurious palace backdrop, which is illuminated by oil lamps. This gambling attraction, like the majority of others in its genre, exudes an air of danger, but it also exudes an air of great majesty and gives off the impression that it conceals a great deal of treasure that is just waiting to be seized. Read our review of this slot to be prepared for all the intricacies that it has to offer.

The majority of the action takes place throughout the game's five reels, three rows, and up to10 paylines that a player has to choose manually. Because of the EXTREME amount of volatility that this slot game has, you need to ensure that you come prepared with a substantial bankroll and that you manage your bets correctly. Return to Player or Payout is set to 96.58%, 94.51%, 91.51%, 87.56%, or 84.55, so we strongly recommend you to find a casino that offers you the best possible number. You may place a wager of any amount between 0.01 and 100 Euros, and the Maximum Win Multiplier is x5000, which means that the Maximum Win Value is 500,000 Euros. There are 9 main symbols, in addition to Wild Symbol, and Scatter Symbols which award a cash prize and trigger the bonus round.

Free Spins. To activate this bonus feature, you must first get three or more Scatter Symbols simultaneously in any position, which will result in 8 free spins. Besides the free spins, you get x2 the bet for 3 Scatter Symbols, x20 for 4, and x200 for 5. A random symbol is chosen by the game engine before each free spin, and that symbol will grow to completely cover whatever reel it lands on. You might earn significant sums of money if you play the Legacy of Dead slot game because it can  randomly select a symbol with a high payoff potential, and then that symbol appears on multiple reels on the next spin. If you are lucky enough to find at least three additional Scatter Symbols during a free spin, prepare for some exciting action. Not only does this result in an extra ten spins being added to the round's total, but the game's engine will also now choose two symbols to expand during each spin, with every consecutive retrigger, the amount of symbols can go up to 9. In order to win, symbols don't need to be in a line from left to right, just on an active line.

Gamble Feature. You are given the opportunity to risk winnings after each and every win. If you choose this option, the scene will shift to show a golden playing card with the side down. If you properly estimate the color of the card, you can double the reward, and if you correctly guess the suit of the card, you may quadruple the reward. After making a successful selection, you will then be given the choice to either take your winnings as is or engage in more wagering in an effort to increase them. Naturally, if you make a bad selection at any moment, you will lose everything.

Our Experience Playing Legacy of Dead

When we began the game, we were met with a familiar environment that brought to mind another Play'n Go classic slot machine called Book of Dead. Because we had such a fantastic time playing the slot machine that was mentioned before, we had high hopes for this one, which was going to be put to the test, and we anticipated it to live up to those hopes. There was nothing innovative about the way in which we carried out the evaluation. After making our customary deposit of 200 Euros, we adjusted the stake to 1 Euro and began playing the first one hundred spins. Free Spins were triggered on around our fiftieth spin, nevertheless, they only awarded us a total of 19 Euros at the conclusion of the round. The next round of Free Spins was triggered around 30 spins after, and this time it was a fantastic one. We retriggered it a total of ELEVEN times, and as a result we won an unbelievable sum of 2,292 Euros! The rest of our playthrough went as expected from a slot with such volatility. During 200 spins, the Free Spins bonus round was triggered twice, however the payouts were almost non-existent. Overall, we got extremely lucky with this machine and were very happy with the result.

This slot's popularity isn't surprising. Ancient Egypt theme and high prizes during Free Spins make this game stand out. Free Spins may seem hard to trigger, but they're worth waiting for. Thousands of gamblers can't be wrong about this slot, but you must be cautious since it's extremely volatile. You may win huge amounts of money or lose it all quickly. Try this slot to discover why it's so popular. Good luck and have fun!

Casinos with Legacy of Dead