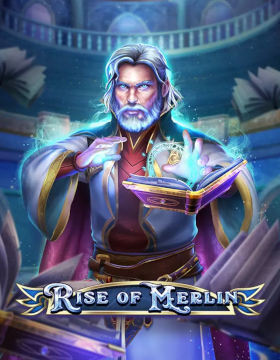 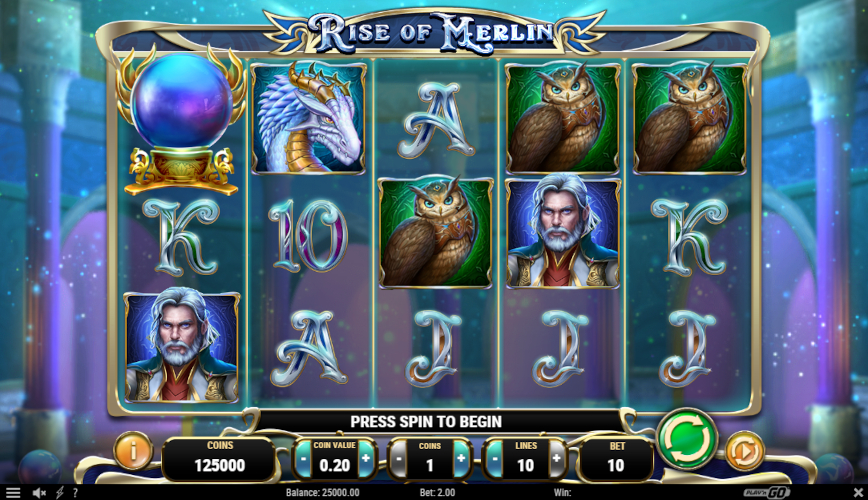 Rise of Merlin is a video slot from Play ‘n Go that was released on June 20, 2019. Play 'n Go is known for making slots that are pleasant to the eye, and the visuals in this game live up to that reputation. They are gorgeously designed and intricately detailed. The wizard's room may be seen partially in the darkness, and Merlin himself makes an appearance on the reels, along with owls and dragons. The pulsating music adds to the already stimulating environment of this slot machine, which has a magical theme throughout. This lively game has visuals that are just stunning, and the playing field, which is a gorgeous hall with quirky lighting, is where the reels are located. There are owls, crystal balls, and dragons among the symbols that crowd the reels. Therefore, you do really get the impression that you are in a fantastical location. When it comes to the design of its online slot machines, Play n Go consistently performs an excellent job. Even though magic is a fairly frequent topic for slot games, Play 'n Go has managed to give it a fresh take by transforming Merlin into a contemporary figure with a more current appearance than in previous slot games featuring the famous magician. It creates a one-of-a-kind gaming experience that you could get to enjoy. You should read our review before deciding whether or not it is a game that is worth your time and money to play.

Free Spins. If 3 or more Scatter Symbols appear anywhere on the reels at the same time, you will be given 8 free spins. Just before the start of the bonus round, a single symbol will be picked at random to appear stacked across all of the reels. Anytime that symbol appears on the reels while you are playing the free spins, it will expand to fill the whole reel whenever it does so. In order to get a win with the expanded symbols, it is not necessary for them to show up on the reels that are next to each other. This is an extra advantage. It is also possible to retrigger this feature by collecting at least 3 additional Scatters, and this will add an extra reel thus making two 2 expanding symbols in play. The feature can be retriggered up to 9 times, and award you up to 9 expanding symbols.In addition to the free spins, you will get  a payout of either 2, 20, or 200 times your initial wager depending on the number of Scatter Symbols that appear on the reels(3, 4, or 5).

Out Experience Playing Rise of Merlin

As soon as we began playing the game, we were greeted with a reelset that had different magical things on it and your typical royal symbols as well. The soundtrack had a note of mystery to it and added to the overall vibe of the slot. Because the possible payoff of a slot machine is of primary concern to a significant number of gamblers, it was our responsibility to evaluate it for your benefit. In order for us to do this task, we resorted to our tried-and-true method, which included making a deposit of 200 euros, lowering the stake to 1 euro, and playing the game for something in the neighborhood of 300 rounds.  Even though we were successful in winning a number of lesser amounts and a handful of wins that were around 10 times our wager during our first 100 spins, we still managed to lose a total of 40 euros in the end. What else could we say about the extreme volatility that was on display? In terms of earnings, the subsequent 100 spins were relatively comparable to the first try, but this time around we had a respectable win of almost 30 times our initial wager when playing the main game. After 200 spins, we were 70 Euros in the red but we still had faith that things would turn out for the better. Shortly after we began our last 100 spins, we hit the Free Spins bonus, and it gave us a respectable sum that was equal to 153 times our original wager. Because of that respectable payout, and a couple of somewhat decent payout during the main game, we managed to come ahead by 14 Euros after 300 spins. Overall, we were quite satisfied with how things turned out, because we knew that we risked a lot playing this slot and still came up top.

There is not much going in terms of bonus features as in most slots by Play ‘n Go, but this makes this slot very easy to understand and enjoyable for people who prefer straightforward games. Since this slot has an extreme level of volatility there is definitely great payout potential, mainly during the Free Spins, but you need to be very careful with it and know when to quit playing because it can either make or ruin your bankroll rather quickly. All in all, if you are a fan of slots by Play ‘n Go, give this slot a try. If you are not, and looking for something with extreme volatility, maybe try something else. In all cases, good luck and have fun!

Casinos with Rise of Merlin