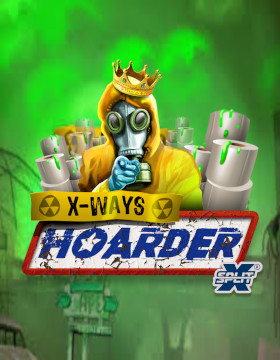 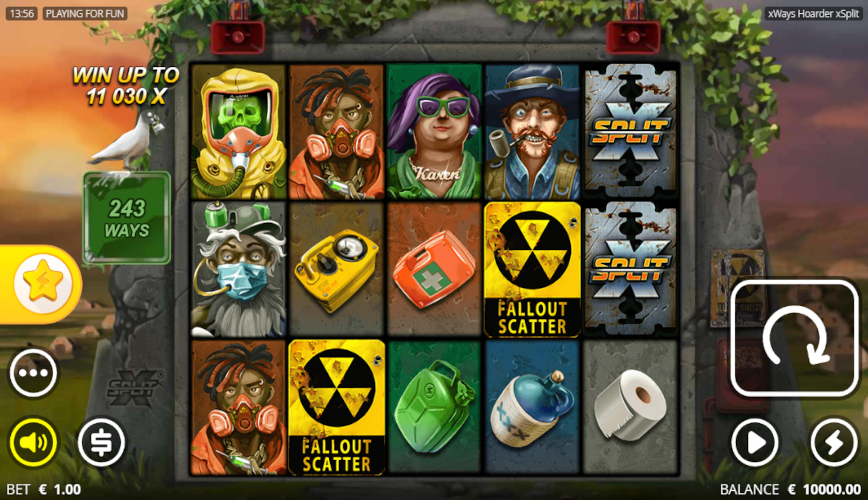 The latest model of a gaming slot from the world famous developer - No Limit City. The action takes place in a post-apocalyptic world, and the interface itself is very skillfully stylized by professional designers to convey the atmosphere of general decline and survival.

The playing field, which the player has to curb, consists of 5 reels, numbering in combination from 243 to 95,760 ways to win. The updated set of symbols that drop out on the three middle reels creates an excellent atmosphere for a measured and effective game. The xWeiss symbol set is combined during the four-level bonus round. When you collect xWays symbols, you get a chance to win 11030 more than the amount wagered on the game - this is a very impressive mark. If you claim this amount, then you will activate the Waste King feature, which promises a really high win.

xWays Hoarder xSplit is another example of creative development from Nolimit City. A lot of options, great customization and the ability to line your pockets - everything a real player needs.

The xWays special symbols can only land on the three middle reels, please keep this in mind before starting the game. Special symbols will add 2 to 4 instances of randomly drawn payment symbols. In the event that for one bet you get several xWays symbols at once, they will all turn into the same payment symbol.

The game provides for new wilds - they can fall out during the main game on reels 3, 4 and 5. Every time you get wilds, all symbols on the left in one row are divided into two equal parts. If you split the xWays symbol with the xSplit symbol, the value of xWeis will double after each split. Further, the xSplit symbol turns into a regular wild symbol and this wild symbol can also be split by a new xSplit symbol that has landed.

If you trigger the "Bunker Raid" event - this option is available in case of 3 or 4 scatters with radioactive danger symbols, you will get from 7 to 10 free spins. If you manage to split the scatter with the xSplit wild, it will immediately turn into a super scatter. If the free spins bonus round is triggered by the super scatter, the super scatter and all the symbols below it become static xWays symbols.

During the bonus round, all xWays symbols that land on you will be static until the end of the round. In addition, you will definitely get a free spin for each xWeiss symbol that has landed. The symbols will drop down from top to bottom and occupy the lowest game row, or the top position above the xWays symbol dropped at the very bottom on the same reel. After that, the dropped symbols are automatically combined with any static xVeys symbol that you have already dropped.

All dropped xWays symbols are additionally added to the counter, and you automatically move to a new level of accumulation of rewards every time you get 3 new xWeiss symbols.

Immediately after each transition to a new level of the accumulator, premium symbols with the lowest value will be removed from the game reels, as well as object symbols. Each time you start from level zero, 3 levels of the accumulator will be included in the bonus row. In the event that you manage to fill the reward accumulator meter, you will immediately proceed to the bonus round with free spins in the Wasteland. This is the most successful outcome of game events - you will only get 4 symbols to combine, 2 of which are the most expensive in the game.

9 different xWays symbols appearing on the 3 middle reels will combine to form a mega symbol occupying all 3 middle reels for each free spin. Each combined mega-symbol is made up of x2 or x4 xWays symbols - their values ​​will be multiplied with each other after each spin of the game drum. This option will allow you to win really huge amounts of money.

The game has an option to purchase a bonus round with free spins. This will give you three options:

Bunker raid. 7 free spins, value - x95 of the initial bet in the game;

Raiding the bunker with 10 free spins will cost x180 of the initial bet;

Buying the Wasteland bonus round with 7 free spins will cost you x777 of your initial bet;

Mysterious, special round, will cost the player x218 of the initial bet.

Thanks to the bonus events, you can count on 1 bonus round for an average of 307 regular spins.

Given the unique theme of the slot, it is very difficult to pass it by. The aesthetic component, together with truly exotic game mechanics, creates an overall excellent gaming slot that follows the philosophy of the manufacturer - the world famous company No Limit City. This slot is far from being a flagship slot, however, it is an excellent test of the pen from the developers. Thanks to customizable RTP in bonus games and the unique mechanics of special symbols dropping out, combining them and further use in the game, the xWays Hoarder xSplit slot can be called one of the most exotic at the moment.