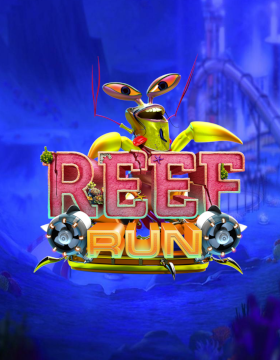 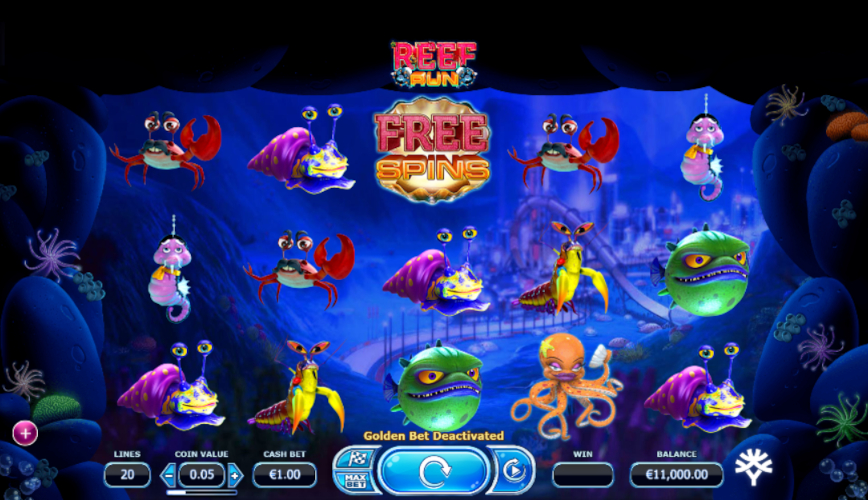 The inhabitants of the wold’s seas and oceans are among the most popular characters for slot machines. There are dozens of online games in the Web, which use marine theme as a basis for their design and symbols. The Yggdrasil company, known as a developer of many popular video slots, shows its own vision of underwater adventures with its Reef Run online game.

The Reef Run slot will be your guide in the virtual world of fun and entertainment. It’ll help you to visit a huge water park, which is situated just on the ocean coast. The slot is free for gamblers, so playing for fun doesn’t require any funds. You’ll need them only if you’re willing to launch it in real money mode.

Design and control elements in the slot

The start screen in the Reef Run online game shows you a vivid picture with many lights and marine creatures. The whole background is occupied by the beautiful scenery. It’s the place where the high mountains border with the deep ocean. Just between them there is a tiny land stripe with a sand coast and the waterside city. It’s a modern megalopolis with a huge water park that is ready to meet tourists.

The game field in the Reef Run slot is situated in the foreground. It looks like a big water bubble. The bubble is absolutely transparent, so you’ll see the whole background with the city through it. All the game are occupies the central part of the slot. It contains symbols of underwater inhabitants, which will be your key to getting prizes in the slot. The whole game field is surrounded by tiny bubbles with numbers. They represent the winning lines, so, if you place the cursor on one, the line will be visualized.

If we talk about the controls in the slot, they all can be found on the long bottom panel. This gray board contains such elements as max bet, coin value, play button, automatic start and coin/EUR switch. The panel also displays total bet, selected lines, wins and your current cash balance.

Symbols and payouts in the game

The Reef Run has 6 regular symbols. Each of them got its own value in virtual coins and looks like some marine creature. The amount of payouts directly depends on the number of images you received on the line and on the type of symbol. If you’re lucky to obtain the best combination of 5 valuable pictures, your award in coins will be the following:

There are 20 available lines in the Reef Run slot, where the mentioned symbols can land. To see the concrete positions of images, which are required to get a win, you can just place the cursor on one of the little bubbles with numbers, situated on the game screen.

The Reef Run video slot has only one special image. It’s Scatter that looks here like golden mussel shell. Inside it you’ll find the title “Free Spins” instead of white pearls. This image has the ability to activate additional round, where all your spins won’t cost even a coin. There are 4 possible awards from the Scatter symbol in the Reef Run slot. They are the following: 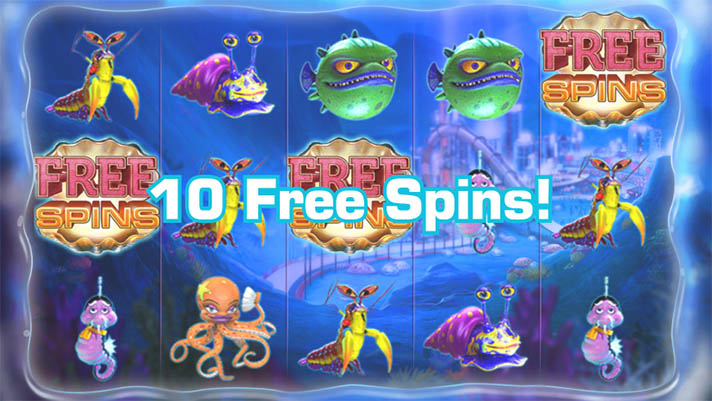 As soon as the additional round will be launched, the game’s background will be changed. You’ll see a wide street of coastal megalopolis, which is full of skyscrapers. The visual one is not the only difference between the regular and the bonus mode. Each spin during the free games can award you with the amount of coins, which is up to 20 times bigger than in the main round. In fact, it works in a very simple way. Whenever any symbol gives you a win, it also gains a multiplier for next spins. First it’s 5, then ten and eventually 20 times to the basic symbol’s value. This raises the ceiling of wins to the level of 20000 coins.

Online games have a number of crucial parameters that deffer them from other slots. These characteristics also have a great influence on the whole gaming process, including bets and wins. If we take the Reef Run slot, it has such essential parameters:

The slots of marine theme are very popular among gamblers, so they have some advantages over other online games. The Yggdrasil developer skilfully uses it in its Reef Run slot, adding a couple of interesting features to the visual part. The incredible multipliers will undoubtedly increase your wins to the highest possible point, while the valuable pictures will create a basis for these huge awards.