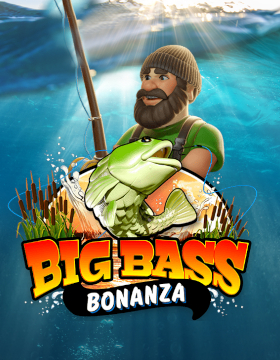 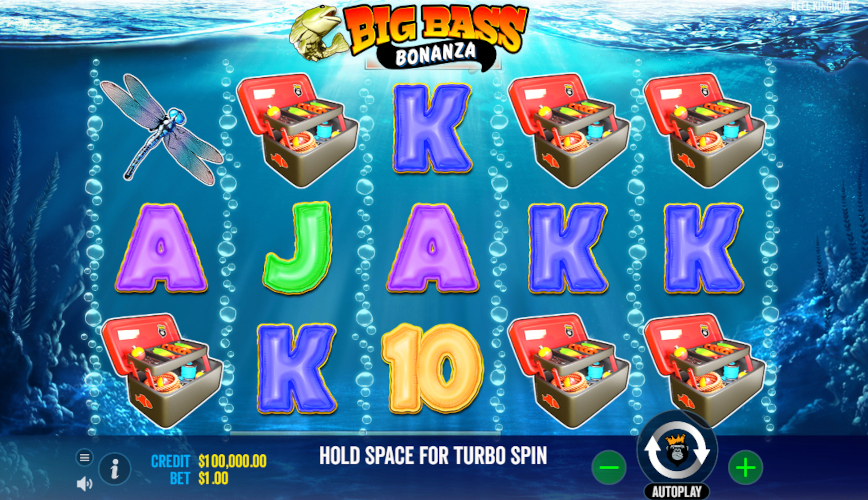 Big Bass Bonanza is a video slot from Reel Kingdom on Pragmatic Play platform that was released on December, 14 2020.  This machine was the first of a bunch of online slot games to build on the idea of Fishin' Frenzy. It took the fundamental premise, board, and fishing motif of the original game and, in all honesty, made a better version of it by adding an extended free spins feature. After its first introduction, it rapidly became one of the most popular slot machines produced by Reel Kingdom and was soon made accessible on a wide variety of online casinos. Not all slots with sequels that provide a little twist on the original are successful, but the Big Bass series has spawned a number of successful ones. With a unique feature board and the ability to achieve free spin retriggers with increasing multipliers, it is easy to see why this series has become so popular. Read our review to be prepared for everything this video slot has to offer.

The majority of the action takes place throughout the game's five reels, three rows, and ten paylines. Because of the medium-to-high volatility of this slot machine, you need to exercise caution while selecting your wagers. The return to player, also known as payout, is 96.71%, 95.67% or 94.5%, so be careful when you choose your casino. The percentage of times that a player will get free spins is 0.88%. You may place a wager of any amount between 0.1 and 250 Euros, and the game's Maximum Win Multiplier is x2100, which means the game's Maximum Win Value is 525,000 Euros. The chance to get the maximum win is 1 in 3,880,481. There are 10 main symbols plus Wild Symbol, Scatter Symbol, and Bonus Symbol.

Wild Symbol. These symbols can appear on all reels only during the Free Spins feature.

Money Symbol. Each time you spin, the Money Symbol will be worth a different amount of money. The money symbols that appear as fish are also recognized as the Money symbols. During the Free Spins bonus round, the fish are assigned a random monetary value at each spin.

Free Spins. When you catch 3 or more Scatter Symbols you trigger the Free Spins Feature. If you land five Scatter symbols, you will be awarded 20 free spins; if you land four Scatters, you will be awarded 15 free spins; and if you land three Scatters, you will be awarded 10 free spins. During the Free Spins Feature each Wild Symbol also collects all the values from Money Symbols on the screen. The player keeps any Wild Symbols that appear while playing the Feature, and they keep collecting them until the round is over. Every fourth Wild Symbol that is gathered reactivates the Feature, which in turn gives 10 more free spins, and the multiplier for the collection of Money Symbols grows from x2 for the first retrigger to 3x for the second retrigger, and then to 10x for the third retrigger. After the previous round of free spins has been completed, the retriggered spins will begin to be played. The multiplier is applied to the spins that were retriggered. Once the feature has been retriggered a total of three times, it will no longer be possible to do so. At the conclusion of a free spin, if there is just one Wild Symbol visible on the screen, there is a chance that Fish Money Symbols will show up at arbitrary spots on the screen. During the bonus round, a different set of reels will be used.

When we began playing the game, we were met with a relaxing soundtrack and wonderfully drawn animation that was reminiscent of a cartoon. Being fishers ourselves, we were interested in putting this slot's potential for making huge money catches to the test. After making our customary deposit of 200 Euros, we adjusted the stake to 1 Euro and began the first 100 spins of the slot machine. After around 50 spins, we triggered the Free Spins and it awarded us a decent amount of 141 Euros. After 100 spins, we were up 68 Euros. Not a bad start. Right when we started our next 100 spins, we triggered another Free Spins round, however this time it paid us only 28 Euros. The volatility of this slot is high, so we weren’t very surprised.  Another bonus round was triggered not long after that, and this time it paid 124 Euros. When we started our final 100 spins, we triggered another bonus round not long after, and this time it paid us 205 Euros. After a total of 300 spins, our overall profit came to 371 Euros, and we were extremely pleased with how things turned out.

There is no wonder why this slot is so popular. The main feature that is loved by fans and was copied by many other slot developers is the Money symbol, it allows you to win a decent amount of money. Triggering the bonus round in this game doesn’t seem to be that difficult, and the payouts are usually great. Take your rods and some cash, and dive into this fishing frenzy.