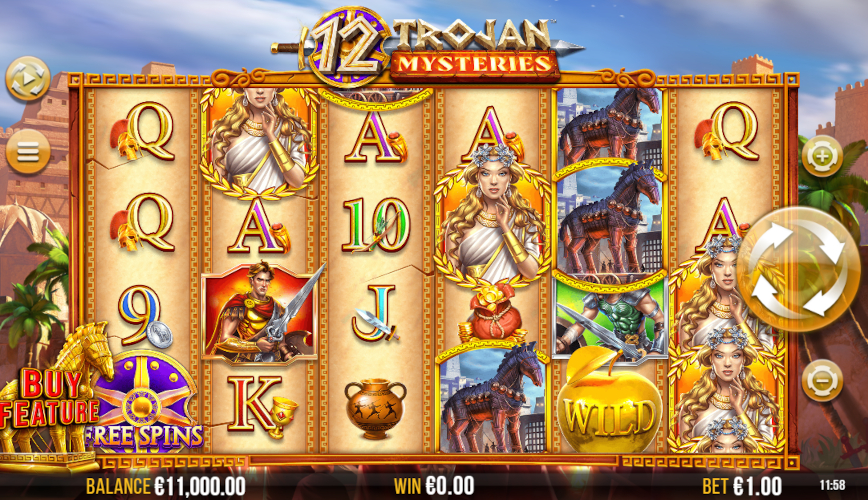 In the heart of Greece an epic myth was born. About love so strong that you don't fear to die for it… Or not a myth? The Trojan War was much more than a myth. It was an epoch-defining moment in the distant past. The conflict between the Greeks led by King of Mycenae Agamemnon and the Trojans lasted 10 years. It began when the wife of the King of Sparta — beautiful Helen, was abducted by the Trojan prince Paris. Determined to get Helen back and punish the Trojans, Agamemnon and his brother marched a mighty army against Troy, and eventually succeeded in bringing its people to their knees.

The spoils of war are yours for the taking. If you’re willing to suit up and spin, you could become the most decorated Trojan warrior in history. However, like all great battles, you won’t be in this one alone.

The game screen of the 12 Trojan Mysteries welcomes you with the ancient Greek mythology theme. It’s animation and colors are rich and vivid.

The game takes place at the gates of Troy, where soldiers have set up camp. In the background there are Ancient Greek temples and castles – making for an exciting atmosphere.

The 12 Trojan Mysteries slot has 6 low value symbols in the form of card symbols. And 5 higher symbols which are The Vase, The Bag of Gold, Achilles The Trojan Warrior, Trojan Prince Paris and Helen of Troy. A gold apple is a wild symbol.

If we take 12 Trojan Mysteries slot, it has such essential parameters:

As for the paytable, there are 11 regular symbols. Card Symbols, The Vase, The Bag of Gold, Achilles The Trojan Warrior, Trojan Prince Paris and Helen of Troy (jackpot symbol).

Low value symbols are Card Symbols. They are worth from 2x to 3x the bet for 6 of a kind.

Higher value symbols include The Vase, The Bag of Gold, Achilles The Trojan Warrior, Trojan Prince Paris and Helen of Troy. Helen of Troy is the highest paying symbol giving you 7.5x the stake for 6 in combination.

The gold apple symbol is the wild and can appear on all 6 reels. It substitutes for all symbols except the free spins scatter. There’s also a Trojan Horse mystery symbol which triggers Mystery Symbols feature.

Buy feature. There is a buy feature available that will cost you 50x your total stake. You would be able to head straight to the bonus round with its help.

12 Trojan Mysteries online slot can be played on most kinds of devices. It offers an exciting gameplay, high volatility and a serious win potential in the bonus features. This slot has 4,096 paylines and that means more ways to make winning combinations. Which makes 12 Trojan Mysteries potentially lucrative, regardless of the amount you stake.