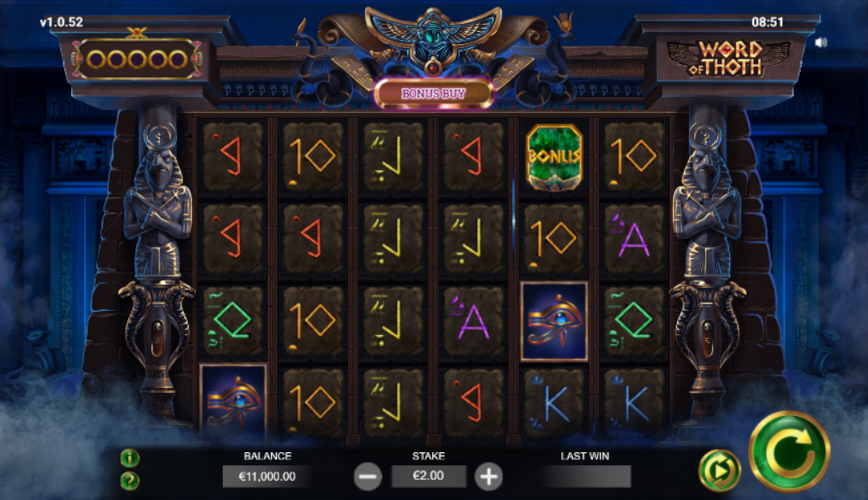 Thoth is the Egyptian god of writing, magic, wisdom, and the moon. He was one of the most important gods of ancient Egypt. He looked like a man with the head of an ibis or a seated baboon with a lunar disc above his head.

Explore Ancient Egypt with the Word of Thoth slot from Jade Rabbit Studios! Uncover the secrets of hidden tombs and win the top prize of 7,384 times the bet.

A young but extremely ambitious studio, Jade Rabbit Studios, is breaking into the niche with the Word of Thoth slot. It will take players to the hidden tombs of a once-great civilization.

Discover the power of Thoth in the Word of Thoth video slot!

Once you start the game you see a dark, misty temple in the ancient city of Khem. Two Thoth statues stand on both sides of the 6x4 reel. The soundtrack adds to the suspense and completely immerses you into the atmosphere of Ancient Egypt.

As for the game’s characteristics, you need to know some of them:

The Eye of Horus and Pyramid star pay 2x, with the Ankh closely following at 2.5x for six of a kind.

The Amulet will give x7 for the same and Thoth is the highest symbol which pays 25x your stake for six of a kind.

A green tablet represents the bonus scatters and landing three or more will grant free spins.

A golden W symbol is the wild which replaces any pay symbol to complete a win.

Free Spins. The Free Spins feature can be triggered by either landing 3 or more scatters on the same spin or 5 or more on this meter that is above the reels, you’ll receive 10 free spins. 2 extra free spins are awarded for additional slot completed during the triggering base game spin or cascade. In the bonus game 3 positions of meter filled will give one more spin and 3x multiplier. 4 positions adds 5x and 2 free spins. A full meter adds 10x and 5 extra free spins. Wilds do not explode during a cascade.

Bonus Buy. You can bonus buy 10 free spins for x80 your stake.

Word of Thoth slot has an exciting gameplay and features. It gives a new perspective on such a popular Egyptian theme and looks and sounds darker.