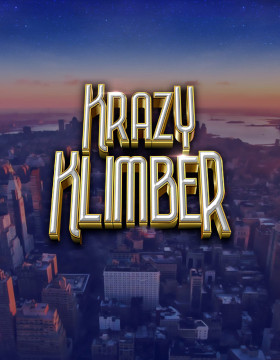 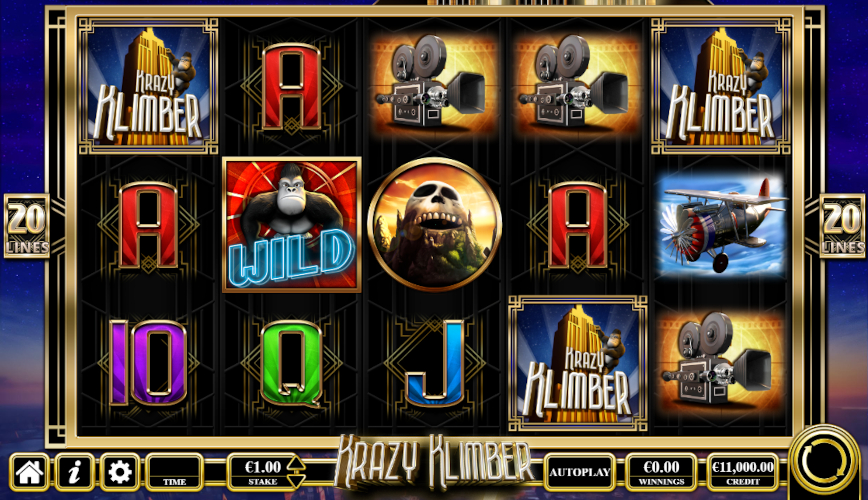 It’s 1933, the very heart of America, Manhattan, a rich, prosperous place suddenly becomes a place of chaos and horror. People scatter in terror because of a giant gorilla which escaped the city’s Zoo and now is climbing the highest building in New York City. His goal is to collect the grand prize, which is up to 1,257x your bet.
The airplanes are circling around the beast.

Climb the Empire State Building with him and collect up to 20 free spins or cash prizes up to 1000x the stake.

The game itself is inspired by the storyline from King Kong. Whenever you launch Krazy Klimber video slot there is a view of the Empire State Building at the heart of Manhattan in the early 1930s. With planes circling around gigantic gorilla which escaped the city’s Zoo. The game is a mix of luxurious Art Deco and cartoonish style. Vintage jazz music plays in the background setting the atmosphere.

Krazy Klimber is played over a 5 x 3 grid with 20 fixed paylines. Wins are paid for connecting three or more matching symbols from left to right only. You can play this game on desktop, mobile or tablet.

If we take Krazy Klimber slot, it has such essential parameters:

The low value symbols are card royals from 10 through to A, awarding up to x5 for five of a kind.

The premium symbol is the Krazy Klimber that awards x50 your bet for five of a kind.

Krazy Klimb bonus game. At the beginning of the feature, which can be triggered by landing 3 bonus symbols on reels 1, 3 and 5, the Krazy Klimber starts his journey to climb the city’s tallest building. Prizes are awarded depending on which storey players climb up to. Each level awards either a cash prize or an amount of free spins.

Free Spins bonus game. This feature is activated by the Krazy Klimber ending up on one of the two free spins levels from the above climb feature. 10 or 20 free spins and a small bonus win are awarded. During the free spins, 1 to 3 Super Wild will move from reel to reel in between spins where it substitutes for all symbols.

Krazy Klimber is a King Kong themed slot. The higher Krazy Klimber gets the more interesting the prizes become, these include different amounts of free spins as well as multipliers. If you’re lucky enough you will be able to hit the 1,000x top prize. Best played on the maximum RTP version of course.