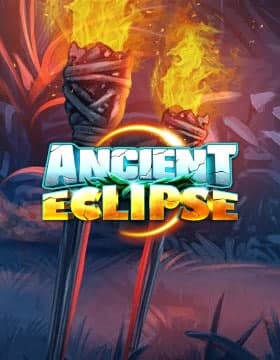 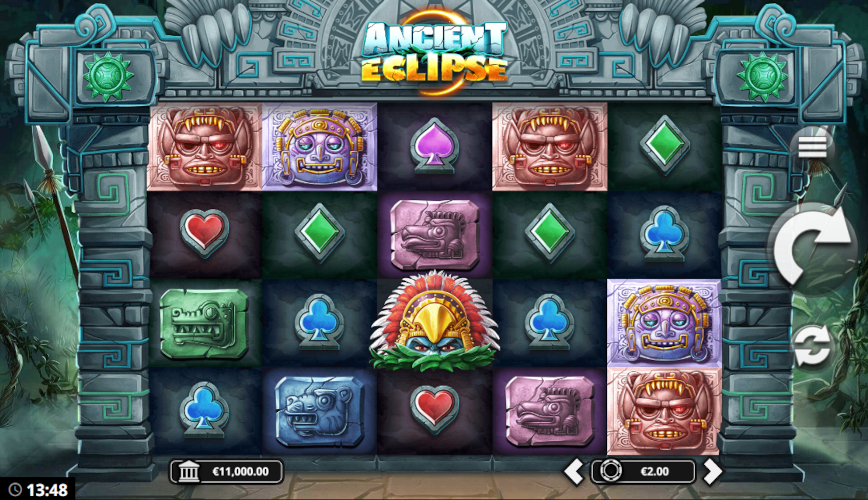 In ancient times people were deeply connected to the forces of nature. The Sun and the Moon were believed to be powerful gods at that time.
For ancient people eclipses seemed amazing, mysterious and ominous events. Different people had their own legends about it. Some thought that some monster was trying to devour the sun.

Others thought that the times of solar and lunar eclipses were battles of the gods, where one of them would win or loose.

At the magic moment when the Moon crosses the Sun the Fortune May open its gate. In this Ancient Eclipse slot when symbols cross each other you could win a prize, get a bonus or a jackpot.

Face the power of gods and embrace your luck in this exciting debut slot game from Bang Bang Games!

Design and main parameters in the Ancient Eclipse online game

This game screen will be your window to the remote jungles of the ancient Americas. With mysterious tribes at the foot of the pyramid.
Just after the launch you’ll see a Mayan-style temple carved icons. Spears and torches are situated on both sides of it. The whole atmosphere is supported by the appropriate background music.

As for the game’s characteristics, you need to know some of them:

As it is common for many video slots, the Ancient Eclipse video slot has 9 symbols. Each of them has its own value in virtual coins. If you start to spin the slot’s reels, you’ll be able to obtain the following awards:

The low-value symbols are card symbols such as spades, hearts, diamonds and clubs. They pay no more than x1 the stake.

An eagle, tiger and croc are mid-value symbols. They are worth from x2 to x3.5 the bet.

The high-value symbols are two Mayan deities. The pay from x4 to x5 the stake for the maximum number of symbols.

There are also some special symbols:

The Sun is the Wild. When 5 of them pitch you will get x10 your stake.

A scatter symbol which is the Warrior in feathered headdress who will show on reels 2, 3 and 4 and will trigger the bonus.

And the Moon symbol that could trigger a bonus.

Moon symbol. With Moon image on the reel it will transform into a Sun Frame which will remain on screen until the Eclipse Feature which can be triggered when a Moon symbol lands in a Sun Frame. Sun and Moon symbols become wilds and guarantee grand payout.

You will multiply the win by x1 for each additional eclipse for huge wins if there are multiple eclipses on the same spin.

To get into the free spins you need Warrior symbols on reels 2, 3 and 4. You are given 10 free spins.

For sure it’ll be very difficult to find any slot about ancient civilizations in the Web that has such a fantastic theme and generous payout. The view on the Ancient Eclipse is really delightful, while the animation level is good enough for PC games. The hit frequency and the RTP ensure lots of winning spins.