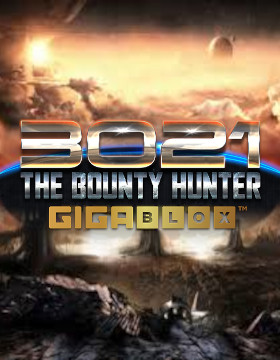 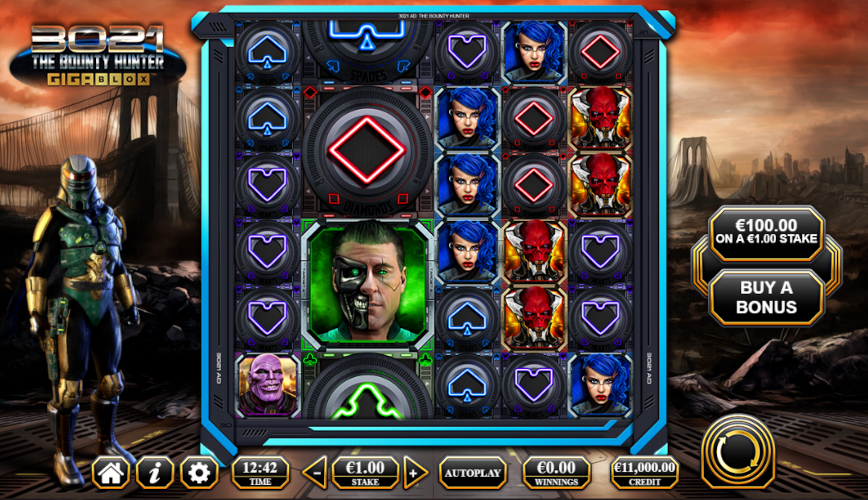 The year is 3021 and the Earth has been affected by several nuclear wars and the toxic atmosphere has forced the civilisation to move to underground cities. Criminals, fugitives and the worst lowlifes roam at will. They fear only the professional bounty hunters. A notorious and merciless bounty hunter named SK-1000 is on the hunt to track them down in return for a Mega Prize.

The game’s design is great and has excellent graphics. The slot’s theme is a dystopian, post-apocalyptic world, with destroyed buildings and bridges hiding in the background. There is the bounty hunter called SK-1000, standing on the side.

The energetic, industrial soundtrack playing in the background while you spin, making a perfect fit for the theme.

On the reels, you’ll find 4 low-paying card suit symbols and high value symbols including the Green Cyborg, the Blue Vixen, the Purple Hulk and the Red Devil.

You can play 3021 AD The Bounty Hunter Gigablox on all devices including mobiles and tablets as well as desktop and laptop computers.

If we take this slot, it has such essential parameters:

As for the paytable, there are 11 regular symbols. Low value symbols are Neon Card Symbols.

High value symbols include the Green Cyborg, the Blue Vixen, the Purple Hulk and the Red Devil worth from 4x to 8x times your stake for a line of 6 of a kind.

There’s also a wild symbol that substitutes for all regular symbols, and a scatter that triggers the Free Spins bonus.

Gigablox. Gigablox are reels of colossal symbols. Symbol sizes range from regular 1×1 to huge 5x5s altering the number of reels in play. They land completely randomly, so players never know what’s coming up.

Free Spins. By landing five or more free spins symbols on the reels you trigger the free spins bonus. You get 1 free spin for each Scatter symbol, and they can land as Gigablox to award a spin for each symbol position covered. For example, if you rolled in eight scatters, you’d get eight free spins.

Random Wilds. The bounty hunter on th left of the reels — SK-1000 shoots the reels, turning hit symbols wild, meaning they can substitute any pay symbol.

3021 AD The Bounty Hunter Gigablox being a great-looking game that sci-fi fans will definitely love. Giant symbols of the various characters and playing card symbols are what really makes this game so exciting, and multiple Gigablox can drop onto the reels at any time. And award you with prizes of up to x3,714 the stake.

Are you ready to rid the earth of evil mutants and collect a bundle of bounties? With the right moves and a bit of luck, you could walk away with prizes topping €371,400